We had a lovely surprise on 16th March – Planet 24 (The Venus & Mars A Cappella Company) came to showcase the songs that they are competing with at the Bath Music Festival on Saturday 25th March.  Made up of members from The Great Western Chorus, Black Sheep and Fascinating Rhythm, this mixed group entertained us with an eclectic  mix of songs.  We wish them every success – watch this space for the results! 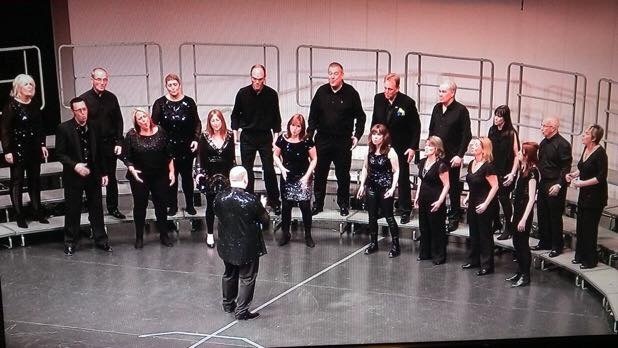 to JFR’s performance at the Thornbury Eisteddfod the following Tuesday.  The evening was led by Wendy Howse, Assistant Director / Choreographer of Fascinating Rhythm and JFR’s MD.
JFR had prepared a new 4- part warm up, written by Kitty Shelton Davies, whose inspiration came from a current chart song – Clean Bandit’s ‘Rockabye’. Working together in their sections, a JFR girl from each voice part – Lead, Bass, Tenor and Baritone – taught their harmony line to the FR ladies, who in turn introduced one of their warm ups to JFR’s repertoire. Both warms ups were then performed together as a whole chorus, producing an amazing sound for the very appreciative audience.  Parents came to support their talented offspring and, along with FR seniors, they gave JFR the invaluable opportunity to perform their Eisteddfod competition songs to a live audience, offered helpful feedback and advice to the girls and wishing them luck.

So, on Tuesday 14th March at St Mary’s Church in Thornbury alongside choirs from Tockington and Badminton Schools, this was the 4th year they have taken part, competing in the under 14’s category with ‘Amazing Grace / Pachabel’s Canon’ in three-part harmony and ‘Joshua Fought the Battle of Jericho’ in two-part harmony.  With higher marks than last year, JFR were awarded a Distinction and were just pipped to the post by one point – a truly excellent result, particularly considering that the winning choir had over 60 singers. In addition, we are proud to say that this year eight of the Juniors ranging from 6 to 14 years will also be performing solos as part of the same Eisteddfod taking place on Sunday 19th March. Three of the girls were extremely courageous and gave Fascinating Rhythm a sneak preview of their performances.  These soloists are very privileged to have been invited to perform their songs at the Iron Acton May Day on 1st May.

Comments from MD Wendy:
We came, we sang, we were truly awesome. New hoodies looked great. I am so, so proud.
The best performance yet. Second place with 87 marks (first place got 88), so only one mark difference. The audience loved us. Well done everyone.

Some comments from the adjudicator:
Clever mix of songs with Pachabel Canon / Amazing Grace which worked very well.  Very clear diction throughout, good use of consonants.  Narrative never compromised.  Admirable, beautiful performance and all without sheet music or accompaniment.

Comments from an audience member:
I was at St Mary’s Church today for the Choirs – I help on the Eisteddfod Committee so I have been present at many of these occasions over the years.  I thought that the overall standard of performance today was excellent, especially in the V21 class and I didn’t envy the adjudicator’s job because everyone gave of their best and entertained us all so well.
I just wanted to say on my own behalf how much I enjoyed the two songs performed by Junior FR – both excellent choices and so beautifully performed.  All of the singers were very engaged in the songs and their enjoyment of what they were doing was evident in their faces.  I thought the combination of Amazing Grace and Pachebel’s Canon was superb. I belong to a local acapella choir and I can understand fully the challenges of this arrangement which worked brilliantly.  I’d be grateful if you could pass on to the choir my personal thanks for such a memorable performance.  I would also like to pass on a comment made by the founder of the Eisteddfod who attends all the classes every year.  She said that the conductor of your choir was really impressive in her communication with the choir.
See you all next year and you and your girls on vocals day.
With best wishes, Jackie Jackson

There is plenty in the pipeline for JFR this year. They are just about to start working on Roald Dahl’s Little Red Riding Hood which they will perform in July and on Friday 31st March we are encouraging each member of Junior FR to invite someone along to their rehearsal as part of ‘Bring a Friend’ night. 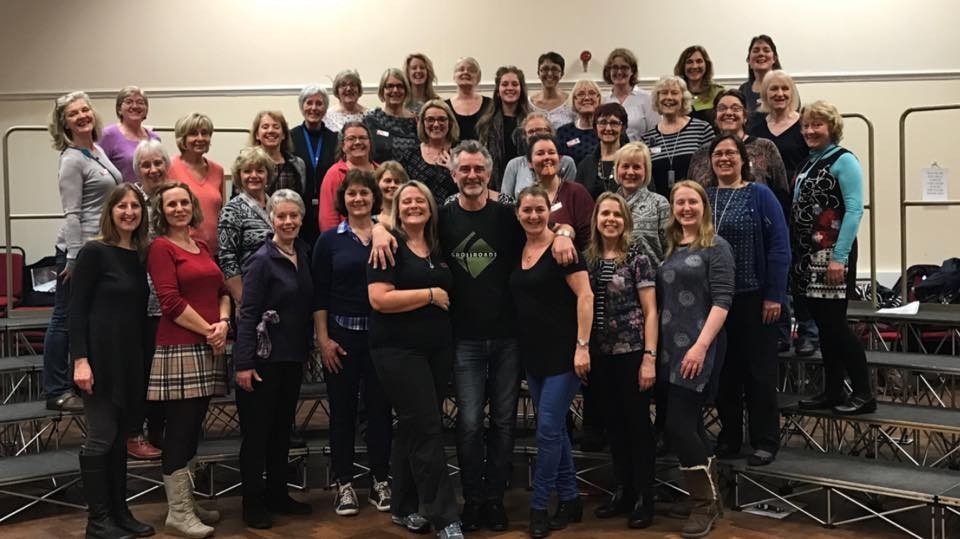 Fascinating Rhythm had a couple of very special guests at our rehearsal on Thursday 16th February –  Lenhard and Jo Van Ballegooijen from Holland.  Lenhard is MD of Dutch Pride who rehearse in Ijsselstein, south of Amsterdam and Jo sings Bass in their chorus. This great connection started with our MD Jo Dean being invited to coach Dutch Pride before their convention a couple of years ago and we are now in the process of arranging for our two choruses to get together with plans for us to go to Amsterdam in April 2018, and we will host them in 2020 (http://www.dutchpride.nl).  Exciting or what!
Jo and Lenhard also had the pleasure of watching the excellent Great Western Chorus and the (fantastic) Ringmasters in concert in Bristol on Saturday 18th.  It really was an evening that showcased all that is wonderful with our particular genre.

Why Join FR? This article explains what just one of our members gets from our wonderful chorus.

Freedom in the making

Jo Dean has been Musical Director of Fascinating Rhythm chorus since 2008 and has bought us through many a storm, either within ourselves or as a chorus together.  Jo’s capacity to gauge each one of us is amazing as she never takes us further than we are able along our journey to freedom.
Yes freedom, that is what being in a large chorus can give you, it starts with a vulnerable unsafe feeling and journeys into a search of self, an exploration to the inner being, eventually and gently releasing one into a new life, it could be called ‘metamorphosis’ (caterpillar to butterfly).
I personally have struggled many a time with just standing within the chorus as I have a medical disorder which causes neck tremor.  However to my surprise, once singing the tremor is released and I can be free in my own movement and not held captive in my body’s preferred movement for me.  This discovery has kept me wanting to persevere with my chosen hobby and I have been a member for almost 9 years.
So you see, singing together is not just about the singing, it is about your overall health and self esteem.  It takes you to places you didn’t know you were able to go. You feel a part of a family, embraced and encouraged to be the best you can be.  That for me is ‘Freedom’.
Thank you chorus family for helping me to find and understand myself a little better, especially chorus leader Jo Dean! 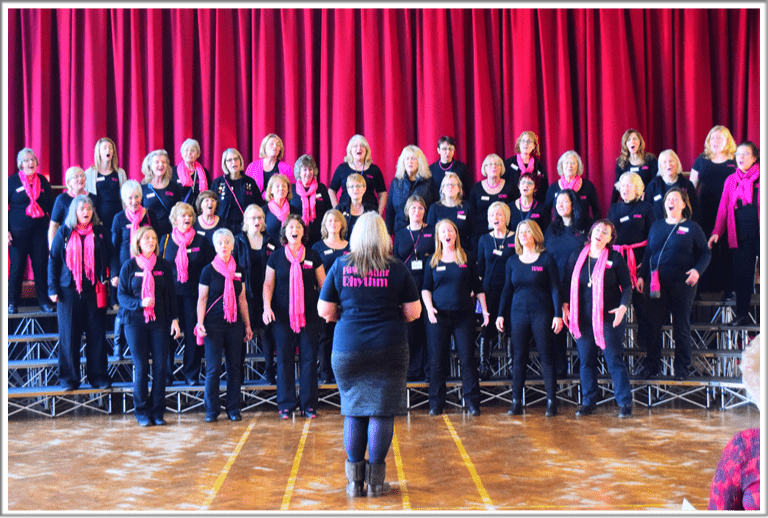 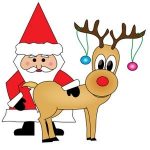 Saturday 10th December saw Fascinating Rhythm head off into the wilds of South Gloucestershire to entertain Sodbury and Yate Rotarians after their Christmas meal.  After warming up our voices in a nearby scout hut, we crept into the little village hall to surprise our very appreciative audience; as we filed in one lady remarked how many of us there were – a surprise to us as we were feeling like a small chorus with only about 25 of our usual 60 singers due to the small venue.
This gig had an intimate feel with singers very close to audience (and the kitchen where the washing up was in progress). We held off the anticipated seasonal programme, starting off with some of our favourite repertoire songs which were very well received, then as we left the stage for a short interval –  and to set the scene for our Christmas set –  MD Jo Dean asked the replete and merry diners to count and name Santa’s reindeer* for when we returned.
Second half started off with a rousing chorus of ‘Ding Dong Merrily’ to put everyone in the

mood, followed by a thundering rendition of ‘Carol of the Bells’.  It was lovely to have the audience join in some of the carols later on, with the gentlemen in the audience making our fab Bass section sound even more awesome.

*There are, of course, 10 reindeer – don’t forget to count Olive (Olive the other reindeer …)